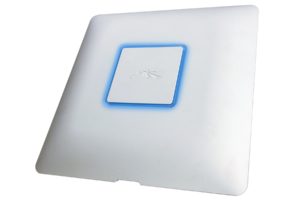 The old UAP ACv2’s have reached End Of Life some time ago. However you can expect them to run just fine for a while longer.
They will keep on functioning just fine alongside any newer equipment you might have, so if you’re running on a low or no budget setup, the information in this post might be of interest.

My (currently stable) setup @home consists of the following:

Adopting a UAP ACv2 into this setup was a bit of a trip because I smoothly adopted a UAP LR into this, wirelessly, and assumed that would go accordingly for the ACv2.

UAP ACv2’s though cannot be adopted by the controller when they are not connected with a wire. In fact they don’t support wireless uplinks at all, per https://help.ui.com/hc/en-us/articles/115002262328-UniFi-Configuring-a-Wireless-Uplink.

So don’t do this (but I’m adding this as it might give you clues when troubleshooting similar setups):

I connected the ACv2 that was sitting idle to my laptop, reset it (pressing the reset button for 5 seconds or thereabout), and used wireshark to find the IP-address. That’s usually 192.168.1.20 though, so I could’ve saved myself that step.
I connected with SSH and logged in (ubnt/ubnt). Ran syswrapper.sh restore-default at least twice (which is a factory reset) but didn’t get anywhere. I even TFTP’ed the device, getting the v3.8.17.6789 firmware on it, but the file /tmp/system.cfg still showed the original setup. That file did by the way also contain the hidden SSID name and the password so I was able to wirelessly connect to it (so at least that part was functioning just fine).

Instead connect the UAP ACv2 with a wire to your switch or router, and THEN see if you can adopt it to your controller.

Now, much of this is EOL, so at the moment, the options are:

The UAP ACv2’s have reached their EOL so they will not receive newer firmware versions.
The UAP LR does support wireless uplink though (in other router-speak, that’s aka a wireless bridge).