The theories of Fowler and Oser/Gmünder provide a framework for understanding the way in which individuals develop their faith and spirituality over time. In combination with Kieboom’s Character Panel, this gives a reference frame which I hope will give you increased understanding of how some people – especially gifted individuals – are put together.

Disclaimer: Piaget’s theory of cognitive development presupposes a necessary sequence of stages. Normally these stages are related to age. Sequences or levels seem to be foundational to the thinking of many, and it’s so often easy to recognize such structuring in theories that are proposed. Often that aspect isn’t specifically tested. When it comes to spirituality, a sequential structure may help understanding one’s religious orientation, but it should not be used to dictate or predict a next step or level.

In 1981, James Fowler proposed a theory of faith development that described series of stages that individuals go through as they develop their faith and spirituality.

According to Fritz Oser and Paul Gmünder (1991), every human has cognitive-religious structures, just like they have mathematical, logical, moral and other structures. They describe the following six stages of religious thinking, and propose that these form a continuum, from simple thinking patterns to complex.
They focused on how individuals include their religious understanding in how they arrive at their opinions, and concluded that one needs to have a balance in a number of dimensions, among others: freedom – dependence, trance – immanence, trust – mistrust, eternal – temporal.

T. Kieboom described the character traits of gifted people and grouped them in a “character panel” (Dutch: ZijnsLuik). Oftentimes, these characteristics are seen as character flaws (the usual nature/nurture debate). Be careful of “fixing” something that’s actually nature. 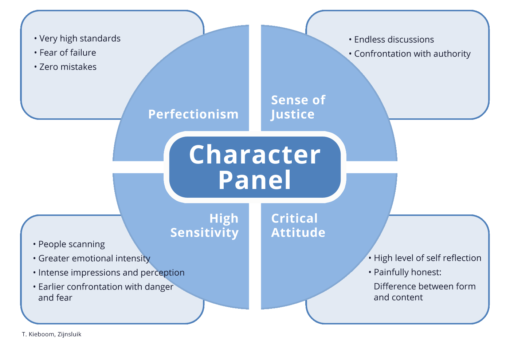 Rules and agreements are very important for gifted children. In that respect, there is a lot of common ground with autism in this area, which often leads to misdiagnoses. If promises are broken without good reason it will lead to a lot of discussion. It is therefore important to explain the reason for the deviation, in a clear and mature manner. The sense of justice is also expressed in idealism: gifted children are often very concerned about unjust world events or disasters (such as earthquakes, endangered species, poverty).
Gifted children often get caught up in things they don’t consider “right” and “logical”. They can judge too quickly, often stand up for the weak or people they consider worthy of care. Gifted students need to understand their position to prevent them being (ab)used for a cause. It is also helpful for them to understand not everybody will understand their position: even though something is painful and a hurtful reality, others may not understand this.

A child’s high sensitivity can be expressed in different ways, but often leads to fears. Gifted children are often more afraid and anxious than other children: they are very aware of what could happen. Highly sensitive children easily overexaggerate issues, or can turn a small correction into a huge personal issue.
This high sensitivity is not be confused with being ‘younger’ or ‘older’ on a social-emotional level: it’s just different.

Gifted children are very observant and can add a critical note to everything. The friction occurs when they also are very strict and their interpretation of situations is irreversible. If a teacher or mentor handles a first interaction badly, a gifted child will remember this; it will be hard for that person to restore faith, and in the following interactions, the student will rarely give in. Gifted children need to be made aware of this so they can learn how to handle this graciously and effectively.
Gifted children can be painfully honest. They need guidance and have to learn they cannot say everything bluntly and that it is often more effective to package something in a socially acceptible way.
This can be challenging at school, at home, and for adults in the work environment. Because the painful honesty, the constant discussion about rules, the hypersensitivity to light, sound, texture in food and itchy clothing sometimes make this extremely difficult. To others, this may come across as know-it-all, hurtful, childish.

Gifted children set high goals for themselves. This high, self-imposed, standard can lead to fear of failure and flight behavior. Gifted children will not want to do certain things at all, or give up tasks prematurely (e.g. the toddler who doesn’t want to paint because the picture will never really resemble his parent).
Perfectionism in a gifted child means that the bar is set (too) high. It is a challenge for educators to help children set their goals realistically, without losing the child’s confidence. Failing to guide a student properly and offering the correct challenge and encouragement easily leads to procrastination (“it’s never the way I want it to be anyway”), workaholic behavior (“everything has to be perfect, I work enough for it anyway”) and loss of trust in adults (“why does the teacher say this is good – don’t they see this drawing bears no resemblance?”).

Being able to recognize this gives you as a parent, supervisor, teacher or lecturer more insight into how gifted people think and act. Recognizing this in yourself gives you more insight, with the understanding that people are, actually, different.
Check out this article about different ways of thinking.