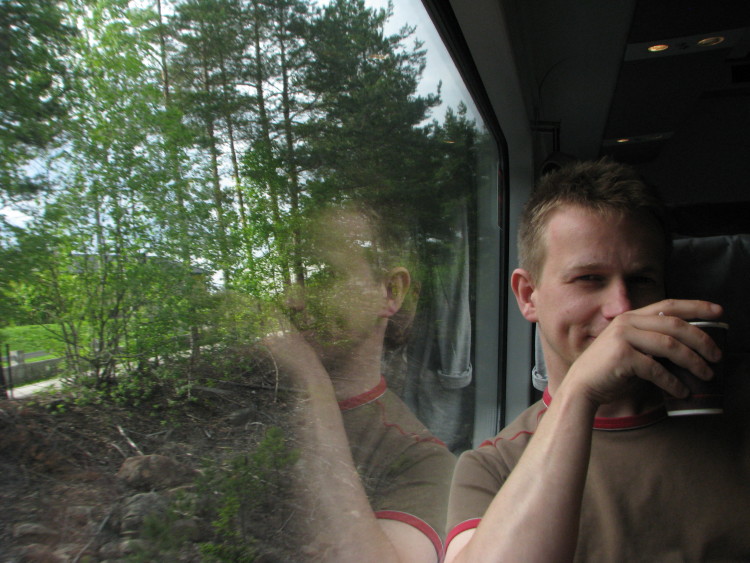 That basically sums up our 3 day trip to Oslo this week!

For our new Dutch passports, we needed to travel to the embassy in Oslo… yep, whole family! Since last year, they can’t ‘do’ passports anymore @ the consulates around the country, so all Dutch people all over Norway (and Iceland actually) have to go to Oslo for their new passports.

So we did… eventually… winter holiday in our area, so a week off from school.

First, an 8 hour train trip. Why train? Wellllll…. driving through the Norwegian mountains make both me and the kids get sick, and it’s quite tedious (love that word ;-) means ‘boring’ to sit in a car for 8 hours, right? Other alternative is by plane, which is faster, but quite a lot more expensive, so… our decision was made. Taking the train would be a not too expensive and more relaxed way of travelling. The long distance trains here have special family section with a small play area with TV for the kids, and it has a ‘restaurant’-section. Nothing fancy, but it has some snacks and drinks.  So, the kids could run around, play, watch TV and we could eat and didn’t have to concentrate on driving.

But, an 8 hour train ride is (even with all the entertainment and food) still:

Ok, we reached Oslo at 7pm. Fortunately our hotel wasn’t too far from National theater trainstation. This hotel has apartments, so we didn’t need several rooms for our family of 6! We got a suite with 2 bedrooms, bathroom, separate toilet, kitchen and living, all quite spacious!  The furniture was a bit outdated and carpet on the floor isn’t really ideal for our asthmatic and allergic kids, but overall we were quite satisfied with our 2 night stay here!
Even though our apartment had a kitchen, breakfast was included in the hotel restaurant. Plenty of food, including Norwegian waffles… mmmm.
The first thing we saw when opening the curtains was…. the royal palace, nice!! The hotel is called Slottsparken, which means Palace park, as you can tell by it’s name it’s situated right next to the park around the palace.
The kids waved at the king and queen, and later Marthe and I ‘hung’ around the palace for a while taking some pictures.

The next day: a 10 minute walk to the Dutch Embassy, and just around the corner we could have our pictures for our passports taken.

After all that official stuff was done, we headed for the Vigelandsparken, by foot – with 4 complaining kids, but did their parents care, oh no… carry on, the park is ‘just around the corner’ ;-)

Too bad the weather wasn’t really good :-( It was cold, very cold. And we thought spring had begun, at least… it looked like that @ home before we left, but Oslo was still covered in snow.

Vigelandsparken was nice, and fun, pictures yet to come…

After a nice warm cup of choco, we took the tram back to the city centre. Finding a warm place to sit for lunch wasn’t that hard, since the centre of Oslo is filled with restaurants of all kinds. Pizza it was :-)

A little bit of window shopping before heading back to the hotel in the afternoon.

Herb and the 3 youngest kids stayed in to play some games and watch some TV, while the girls (Marthe and I) ofcourse had to do some more shopping, can’t be a small town girl visiting a big city without some serious shopping, right? ;-)
Mission accomplished
Did some grocery shopping as well before going back to the hotel and make some supper.

The next day we already left Oslo, after yet another good breakfast.